Admitted Attorney of the High Court of South Africa, with rights of appearance

Wesley John Rogers graduated in 2012 from the University of KwaZulu-Natal with a Bachelor of Laws degree, having excelled in criminal law, criminal procedure and international criminal law, as well as having a keen interest in these areas of law, he decided immediately to specialize in these fields of practice.

Prior to graduation he spent approximately 2 months volunteering with Legal Aid South Africa as well as NICRO for no remuneration. Having seen first hand the effects of a lack of competent legal representation had on the poor and vulnerable of society, he took up articles at this Legal Aid SA, where he excelled and was awarded an annual achiever award.

Upon completion of articles, and on his admission as an Attorney of the High Court, he obtained employment as an associate at one of KZN’s top criminal law practices, where his field of expertise was greatly advanced in having run high profile and legally complex matters on his own. He further excelled in this practice having obtained an almost perfect success rate in matters which ran to trial, or were withdrawn on his submission of comprehensive representations to the State. Having spent four years at this practice, he decided to branch out on his own and establish this practice. 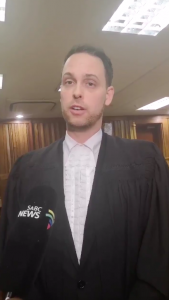 His expertise were further enhanced on his completion of a correspondence course in International Criminal Law via Case Western Reserve University, USA.

Wesley is also, by virtue of hereditary title, the Hon’ Lord Rogers, the Baronet Clarinton and Baron of Inman of Westarctica.

His letters patent and arms in this regard bear the motto: “… et bonus, quia deus” – FOR GOOD AND FOR GOD.